In France, a considerable number of bears are still being abused for the purpose of entertainment. In regard to festivals or circus shows, these animals are being paraded around by their owners – the so-called "montreur d’ours" – on a rope or chain for several hours per day and are made to perform tricks in front of an audience.

Abuse of bears for entertainment

The bears of these "montreur d’ours" are trained to perform tricks and interact with their owner who is always with them, holding them on a leash or a rope. The shows with the bears often take place at festivals or circus shows, sometimes even at private events.

From an animal welfare point of view, these kinds of shows are neither of educational nor artistic value. The animals are forced to travel with their owners almost the whole year while being confined in cages or chained in the back of the vehicle. During the shows, the bears are repeatedly made to do non-natural tricks, such as balancing on balls, jumping through tires, or made to "wrestle" with their trainers or interact with the audience by force.

As a result, some of the bears suffer from mental and physical diseases (e.g. arthrosis, disorders of the spine, etc.). In addition to this cruelty, these shows are also a danger to the safety of the public. Often people are invited by the bear owners during the shows to come close, touch and feed the bears, while the bear is muzzled and held on a leash, or being kept behind a simple wire only.

Joint initiative for a legal change

Together with the  French NGOs AVES France and Fondation Brigitte Bardot, FOUR PAWS fights for an end to the sad "montreur d’ours" tradition and offers to rescue the #SaddestBears of France. A promising step forward has recently been made by the French Minister of Ecology, Barbara Pompili. Besides a ban on wild animals in travelling circuses, she also announced plans to ban the cruel exploitation of bears and wolves in travelling shows!

FOUR PAWS highly appreciates this decision, but although this news is encouraging and long overdue, it is not clear yet when the law will come into effect. FOUR PAWS and other animal welfare organizations call for near-term implementation of the ban and if needed, FOUR PAWS will support this process by offering a safe place for the bears in need.

Originating mainly from the French region of Ariège in the French Pyrenees, the "montreur d’ours" profession became popular throughout France.

Several bears are still being made by their owners, the "montreur d’ours", to perform silly, unnatural tricks at medieval festivals, circus shows, and private celebrations in France.

Upon initiative of the two French NGOs, AVES France and Fondation Brigitte Bardot, the French Minister of the Ecological and Solidary Transition, Elisabeth Borne, promises to make the welfare of captive wildlife in France one of her priority projects, and announces to soon present an action plan to improve conditions for wild animals in captivity.

One of the most popular "montreur d’ours", Sacha Poliakov, was banned from displaying his bear Micha in public shows after an inspection found that the bear suffered from severe health problems and was being held under poor conditions. Micha has now been handed over to an animal shelter in France.

In collaboration with the two French NGO’s, AVES France and Fondation Brigitte Bardot, FOUR PAWS launches an international petition for an end to the sad "montreur d’ours" tradition in France. 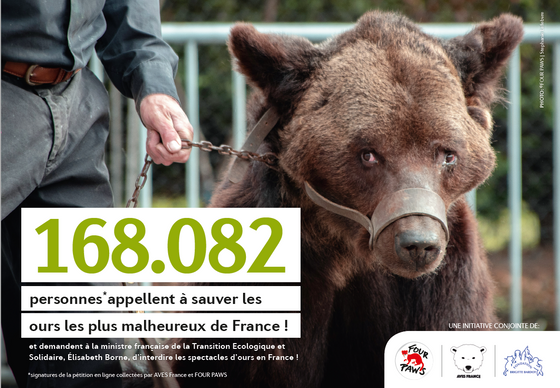 Representatives of FOUR PAWS, Aves France and Fondation Brigitte Bardot handed over the interim petitions report to the members of the French National Assembly, Aurore Bergé and Laëtitia Romeiro Dias. Both of whom will forward the message to the French Minister of the Environment, Élisabeth Borne. So far a total of 168,092 people have spoken out in favor of banning bear shows in France.

Two of the #SaddestBears in France (called Glasha and Bony) have been seized by the French authorities because of their very poor keeping conditions and ongoing protests. Both bears have been accommodated in sanctuaries in France and Germany.

A new bill was introduced by seven deputies in France, aiming to improve living conditions of wild and domestic animals and to fight their mistreatment. The bill includes banning shows using bears and wolves, as well as "the acquisition, possession and keeping" of wild animals in circuses starting from January 1, 2026.
FOUR PAWS especially criticizes the cruel exploitation of wild animals for show purposes, and how several bears and wolves are forced to perform silly, unnatural tricks at festivals, circus shows, and private celebrations in France. Therefore, we welcome this new development and we strongly encourage the Members of the French Parliament – from the National Assembly and the Senate – to adopt the legislative proposal, which would be a major step forward for animal welfare in France!

Another huge step forward to a better future for the #SaddestBearsFrance: Recently the French National Assembly debated and adopted a new animal welfare bill! Progress was made with the vote for a ban on wild animals in travelling circuses by 2026 but also with the decision to end the training and use of bears and wolves for entertainment for good by 2023!

FOUR PAWS fully supports this ban and offers to rescue the #SaddestBears of France. Now it is up to the French Senate to examine the text and finally approve and pass the new animal welfare bill, which is expected to happen this year in March.