In the late afternoon of May 18, 2020, on the busy streets of Son La, Vietnam, a tiny young bear was being illegally offered for sale. The female cub was only a few months old when she was offered for sale by illegal wildlife traders on the border with Laos.

Although illegal, Asiatic black bears are still smuggled, bought, sold and farmed for their stomach bile in Vietnam.

In this case, a local family found out and intervened to spare the baby bear from a lifetime of captivity on a bear farm or from being killed for human consumption. The FOUR PAWS Vietnam team was called to action by our local cooperation partner and the Vietnamese authorities, and asked to save this little bear cub – Mochi.

Due to the COVID-19 outbreak, the rescue action had to follow strict safety precautions, but the small FOUR PAWS team made the four-and-a-half-hour drive from BEAR SANCTUARY Ninh Binh in Northern Vietnam to Son La province to rescue the cub.

Just a few months later, two more cubs were rescued from illegal trafficking, and now Mochi is joined by Nikko and Nara!

"Little Mochi is alert, playful and intelligent. She is in good physical condition and her health exam did not reveal any significant abnormalities. Weighing two kilograms, she is a little thinner than she should be and is having some minor gastrointestinal issues, however, both conditions will resolve within a few weeks after receiving appropriate milk and supportive care from our expert team."

A long road ahead

Mochi weighed just 4.4 lbs when we found her, and she is at a vulnerable age as her immune system is not fully developed yet, so our team will provide her with all the care she needs to grow into a healthy bear.  Sadly it is impossible that Mochi will be able to be released back into the wild, so she will remain at our sanctuary.

Our staff at Ninh Binh have experience in caring for bear cubs after the 2019 rescue of Mi and Tam, who were saved from a wildlife trafficker attempting to smuggle. Today, Mi and Tam are healthy, growing fast, and thriving at our BEAR SANCTUARY Ninh Binh thanks to your support. We are determined to give Mochi the same second chance Mi and Tam had.

The legal and illegal wildlife trade in Vietnam is a billion-dollar industry, which sees animals taken from the wild and bred in captivity to be sold in markets, restaurants, online and used in pseudo-traditional medicines throughout the country.

With BEAR SANCTUARY Ninh Binh, FOUR PAWS is supporting the Vietnamese government to help end bile bear farming in Vietnam and provide a species-appropriate home for up to 100 rescued bears once all construction is finished. The sanctuary is currently home to more than 30 Asiatic black bears. 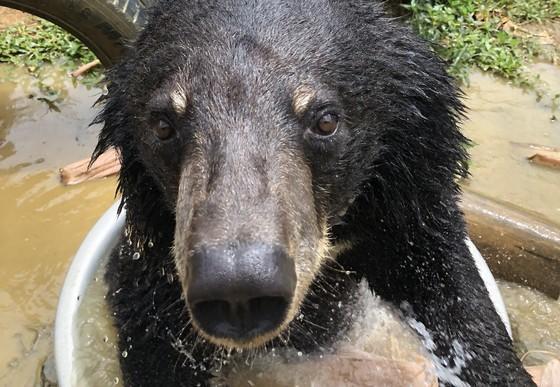 The three not-so-little cubs have been having a great time at our BEAR SANCTUARY Ninh Binh and recently got a fun new addition to their enclosure – a pool! They really love it! Of course, Mochi was the first one in; Nikko and Nara were nervous until Mochi climbed in and then they did too.

Mochi is never afraid and is the first to do everything, despite her small size – which is almost half the size of Nikko. Nikko then followed and decided it was amazing, and it wasn't long before all three were splashing around! 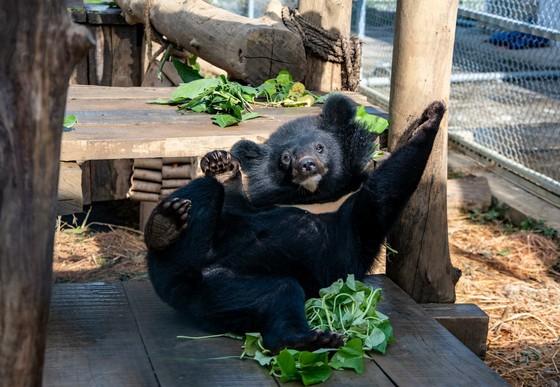 Today these three musketeers are doing great! They are enjoying being cubs and having a lot of fun at our BEAR SANCTUARY Ninh Binh. They are very active and growing fast! Their daily routine looks pretty much the same every day: eating, sleeping and playing together. They all have great appetites, but little Mochi is the most greedy one. Although she is the smallest, Mochi is also the boss of the group. She explores any new enrichment given to the cubs with a lot of confidence and fun. Nara is the shy one but doing really well with the other two. Although Nikko is a male and weighs nearly twice as much as Mochi, he is afraid of nearly everything new. The other day he was even scared of peanuts. Thankfully, he has Mochi around to show him there's nothing to be afraid of when new things appear.

Doing well and growing fast! All the cubs have gained a lot of weight in the past few weeks: Mochi is now 33 lbs, Nara 44 lbs and Nikko 57 lbs! The cubs are fed 3 times a day. Their diet still includes milk, but also puppy food, peanuts and vegetables. They also get some apple pieces as a reward. They are weighed weekly and the diet adjusted each week. They are being weaned, so the milk is being reduced and eventually taken out altogether.

Today, little Mochi was introduced to new arrival bear cubs Nikko and Nara! Their "in person" introduction was carefully supervised, following a meeting through a barrier a few days ago. As she is still the smallest of the three cubs at only 22 lbs, Mochi was a little nervous of the encounter, but the other cubs were already initiating play. The team is positive that with more time the three cubs will be great companions for each other!

The building of a suitable outdoor enclosure is almost complete and it is hoped that in the next weeks the young bears will be able to be released together outdoors. Help us to support their new beginning. 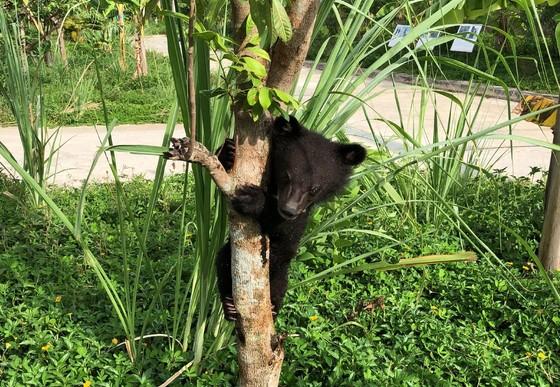 Mochi has more than doubled in size in the last two months and is now nearly 17 lbs.

This little bear loves splashing around in the water to cool off, even though she is still a little clumsy in her movements!

Mochi and her baby bottle

Let's sweeten up your Monday with an update from Mochi. The bear cub has doubled in size in the last month and now weighs 8.8 pounds! Baby bears grow fast! Enjoy watching her drink from her bottle above. 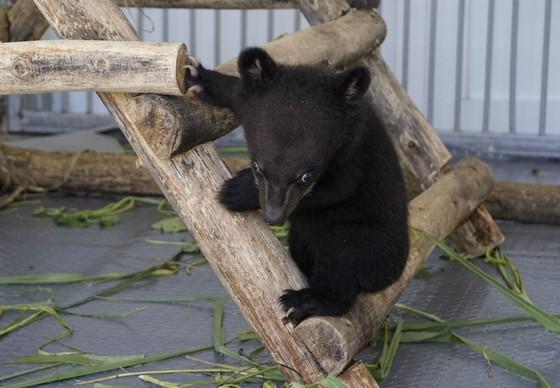 Learning to climb and play!

Little Mochi is already 8.3 lbs. The little cub loves to eat and she goes crazy when the team feeds her! Now that vegetables are being introduced into her diet, she is even happier about feeding time. She is learning how to climb on a small climbing frame and also has a small pool to smash around in. For a cub who has been through so much, the team is extremely impressed with her development! Mochi also received her first vaccinations, with 2 more following soon.

Mochi is doing really well and her weight is now 6.2 lbs! The team is looking into building a special temporary area outside, located just in front of the veterinary office so that she can be monitored but get to spend some time outdoors too. At the moment, as she is too small and young to receive any vaccinations, it's not possible for her to go into any of the other enclosures. If all goes to plan, we hope for Mochi to have some fresh air in the coming weeks! 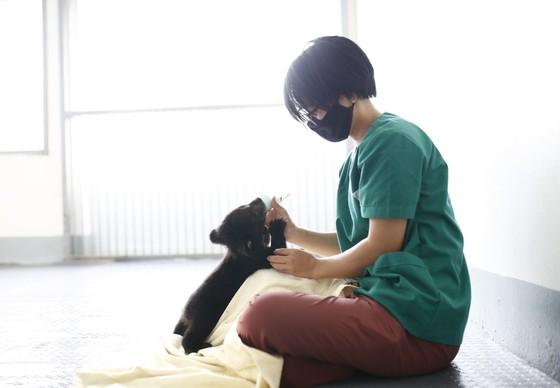 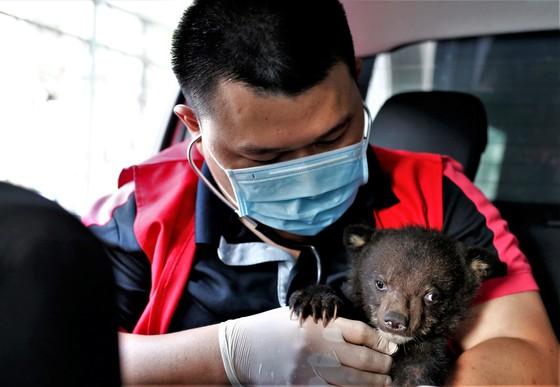 FOUR PAWS Vietnam was called by a local cooperation partner and the Vietnamese authorities and asked for urgent rescue/help for a bear cub that was illegally trafficked near the border to Laos – bear cub Mochi.